I invite you to check out my books: 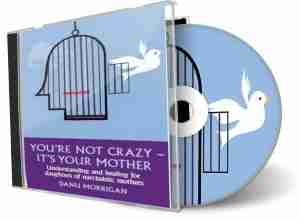 When I had the forum this question came up regularly, and even now I get emails asking me about this very challenging issue, so I share here what we learned/realised through the forum about narcissistic grandmothers.

For some reason society seems to hold the cult of grandmother even higher than that of mother, if that's possible. Grandmothers seem to be held as sacrosanct, and the grandmother-grandchild relationship as unbreakable.

Here's the thing though: the grandmother we are speaking of is not the kindly, rosy-cheeked, apple-pie-making, cuddle-giving grandmother of popular imagery, or even our own imagery.

This is, bluntly, an abuser to our children just as much as she was to us. And, for a double whammy, she can use her treatment of our children to further abuse us.

This abuse takes various forms for her grandchildren, just as it did for her children.

She might scapegoat the grandchild, bad-mouthing them, running them down as she did us, dismissing their successes and lives just as she did ours, hurting them dreadfully.

That, believe it or not, is the best option.

The worse option is that she would hijack one or more of our children. I am quite serious when I say this. It happened to so many of the women on the forum, and most of them didn't realise it till it was too late, and had lost their now-adult children to their mother's clutches forever.

The narcissistic mother does this by grooming our children. Not sexually, in the way that word is normally used, but grooming nonetheless.

She can start with very young children: the narcissistic grandmother can seduce them with sweets, or toys, or later bedtimes. In a way this is very insidious because the role of healthy grandmothers is to spoil their grandchildren a bit, as a rare treat, in a way their mother can't do as a way of life. And this works very well for everyone, but only so long as the grandmother is healthy and understands her role is do this as a treat rather than manipulation, to keep it to reasonable levels, and to step back when appropriate.

But the unhealthy narcissistic grandmother can subvert this to undermine your parenting entirely from the child's earliest days. "Oh don't mind Mummy, she is so mean not to let you eat sweets before dinner/stay up late/go without washing. I'll let you do it, but it'll be our secret, okay?"

What five year old has the sense to realise that's wrong or to stand up against it? And be sure that your narcissistic mother will do it so subtly and cleverly that you most likely won't even realise it's going on.

Then into the teen years the seduction and alienating of your child continues. Narcissistic grandmothers can take advantage of the way teens feel so misunderstood and badly treated by their parents: “Oh I know your mother is horrible to you. Come to me and I'll treat you much better." - Of course it would be more subtle and more strategic than that, but that'd be the absolute message. And for the poor angst-ridden teen, that can be so appealing, understandably.

Then, when your children reach adulthood, money can be a bait for them. If your narcissistic mother has money, she might use that to bribe them away from you. And it’s very likely that your relationship with your children might not be great, from their lifetime of being turned against you, so again, this is very appealing. And even if there's no money, there can be the fallout from the life-long grooming.

The situation can even end up with adult children being fully estranged from their mothers in favour of their narcissistic grandmothers. In this way your narcissistic mother will have literally stolen your children from you. It’s an absolute win for her, because she gets to hurt and abuse you this way, and has other people in her clutches now. What's not to like, from her point of view?

If I paint a bleak picture it’s because the situation is bleak, and I want to leave you in no doubt of that. I read so many heart-breaking stories from mothers that this happened to. And they all said, “If only I’d nipped it in the bud. If only I’d stopped my children spending so much time with her.”

Narcissistic Grandmothers Are Too Toxic

So, if you ask, "How can I deprive my children of their grandmother?" I say to you: If you keep your children away from your narcissistic mother, you are not depriving them of anything good; you are protecting them from an abuser.

Despite the cultural baggage around the concept of grandmothers, you have the absolute right to protect them from abusers. Indeed, as a parent, you have the responsibility to do so. You wouldn’t let your children go to a house with a known paedophile in it and would feel no guilt or second-guessing about this decision. Narcissistic grandmothers are just as dangerous, in a different way, as a paedophile.

Your child might well ask you, even sadly, “Why don’t we see Gran any more?” Or, if you kept them away from birth, they might hear friends talking about visits to their grandmothers and wonder why they don’t see theirs, and ask you.

You can answer in an age-appropriate way: “Your gran is a very nasty person. She was mean to me all my life, and when you were born she started being mean to you and so we keep you safe by not seeing her.”

In other words – explain in your child’s known frame of reference, and your own situation. Comfort your child if she’s sad about the loss – it is totally understandable that she would be, but know that it’s both your right and responsibility to make this decision. Even, your child might be angry at you, depending on her age and how deep the rot has gone. Even so, don’t feel bad for holding to your decision I suggest.

Assuming the rot either hasn’t happened, or is recoverable from, your own relationship with your child can then grow and flourish in a healthy way from then on.

In most cases then, the child will grow up understanding and realising why you had to cut off contact, and there’ll be no moment when she accuses you of denying her her grandmother.

But even if she does. Say, for argument’s sake, that she does criticise you in later life for your decisions now.  I strongly believe that even so, it is still the right decision. A parent’s job is to make the hard decisions when they’re the right ones. And if the price for protecting your child from abuse is her later anger at you, then, it seems to me, so be it.

Again, I don’t for a minute think this will happen, if you stop the rot of the toxic relationship before it begins. But I do strongly believe that as parents we still have to do the right thing. Easy for me to say, I know. My own narcissistic mother ignored my son as she did me, and his reaction when (at age 12) I told him he’d never have to see her again, was a literal sagging of shoulders in relief. So I had no risk of this happening at all, so you could argue it's a bit rich of me to be advocating it.

Also, as ever, I don’t seek to coerce or control any decisions you might make.

I am just sharing the experience of many other women who did experience this situation, and their heartfelt wishes for what they had done differently. In a way it's not me saying all this to you; it is them.

In summary: you have the absolute right and responsibility to protect your children from abusers, no matter who they are. And if she's too toxic for you, then your child's narcissistic grandmother is surely too toxic for your vulnerable precious child.

What About Extended Family?

But frankly, that's not likely to work. The narcissistic mother will no doubt be busy smearing us to the extended family, and forcing them to pick sides, and most of them will pick her for fear of her wrath or rejection or tantrum.

This is horrendous, and horrible, and unfair ... but it's part of the toxic soup narcissistic mothers create for us all to swim in.

If say your sister's husband was a paedophile, would you let your children play at their house? And if your sister said, "No, I won't come and visit you without him, it's all or none of us," what would you do then?

Your children's love for their cousins would be important, but their safety even more so.

I've no easy answers or solutions for you. I just know that we have to protect our children, and often there's a high price for that. And it's so frustrating and I am furious at the injustice of it, for all of us. But that frustration or fury doesn't change the facts. It's just yet more fallout of the narcissistic mother's toxicity. It sucks.