It’s very common for Narcissistic Mothers to have a Golden Child and Scapegoat dynamic going on in their family.

What this means is this: one child in the family is the Golden Child, and one or more is the Scapegoat.

The Golden Child can do no wrong. She gets given the best of everything – perhaps even apartments or houses bought for her. Her most minor achievements are celebrated and held up for admiration. Her misdemeanours are glossed over and ignored.

The Scapegoat on the other hand is, also as the name suggests, the person on whom all the ills of the family are projected. They can do no right. Their major achievements are dismissed. Any money spent on them is the bare minimum and is spent begrudgingly.

Growing up the Scapegoat can understandably feel very jealous of the Golden Child. This, of course, leads to friction between the children, which suits the Narcissistic Mother. Divide and conquer and all that, and lots of opportunities for triangulation. Indeed, the Golden Child can be encouraged by the Narcissistic Mother,  either overtly or tacitly, to bully the Scapegoat which adds to the friction.

The Scapegoat can be punished for doing something well, because that threatens the narcissist’s narrative that the Scapegoat is all bad. Not overtly punished, because that would also ruin the narrative that it’s all the Scapegoat’s fault. But subtly, sneakily. You had to give up dancing just as you reached a triumphant milestone because of [insert trumped up excuse here] – maybe they supposedly couldn’t afford dance classes any longer, or the lift to the dance classes was no longer possible, or they fell out with the dance teacher. Bonus points if the reason for sabotaging the dance classes involved the Golden Child: “Golden Child wants to do dance too, and we can’t afford both, and it’s not fair for you to be the only one.” (And no matter if Golden Child does stuff that you don’t.) Or, “We can’t bring you to dance class any more as Golden Child is taking up karate and her classes are on at that time.”

Or the punishment might be more subtle. Perhaps your dog got given away, ostensibly for a totally unconnected reason, after you won the dance medal. When such things happen enough you’ll learn, consciously or unconsciously, the pattern that bad things happen after you do something good, and you’ll start to sabotage your own successes to protect you from that. (As an aside, be aware that such sabotage patterns will last a whole lifetime until and unless they are pro-actively erased. EFT/Tapping is excellent for identifying and erasing such patterns.)

Or the punishment might be as head-wrecking and subtle as your parents’ reaction. Oh they’ll say the right things. But their expressions and their coolness will tell the real story, that they’re angry at this achievement (again, because it spoils their carefully constructed narrative), and you’ll pick up on that and feel the icy blast of their disapproval.

Likewise you might get rewarded, in a strange way, for failure. You might get the approval of living down to their expectations, and you’ll pick up on that, and even that meagre approval feels good.

The Scapegoat is often what’s called the Identified Patient. This is the one who all the ills of the family are projected onto, and who often will play out those ills.

It’s not surprising that if you were abused and demeaned and treated unfairly all your life that you might have issues such as eating disorders or addiction problems or anger management issues, or depression etc. And so this reinforces the narrative that you’re the wrong one, the bad one, the Black Sheep.

You even believe it yourself, that you’re the problem child, the bad seed. After all, you do have the eating disorder or whatever. That’s undeniable.

They might bring you to therapy to try to get you fixed.

One of two things will happen there. You’ll either end up with a bad therapist who will believe the narrative as presented, and further reinforce your sense of your own badness and failure. Or, you’ll have a good therapist who sees through the lies and tries to treat the real broken dynamic rather than the supposedly broken you. In this case, at the first whiff that there might be something wrong with them, your parents will find some excuse (that no doubt is your fault) and whisk you away from that therapy, and that aborted therapy is another failure of yours.

The scapegoat is truly in a no-win situation. In most cases the abuse is subtle enough that it wouldn’t warrant the involvement of social services, and so there is no option but to endure it to adulthood.

I’d go so far as to venture that, if you’re reading this, you were more likely to have been the Scapegoat than the Golden Child.

This is because, contrary to the way it felt growing up, the Scapegoat is actually the lucky one. (I mean relatively lucky, of course. No child of a narcissistic mother can be ever described as being lucky.)

The Scapegoat on the other hand, is the independent one. She’s the one who’s driven to seek answers and who may well realise about Narcissistic Personality Disorder. She’s the one who can break free from the unhealthy dynamics of the family and do her best to create a healthy life and recover from the lies she was told about herself since the day she was born. It’s still not easy for her (i.e. for you) of course. Nothing about this journey is easy. But it’s doable, and possible. 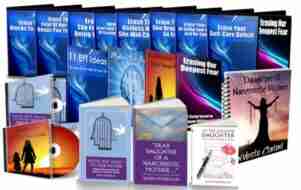