In every family situation where you have a Narcissistic Mother, you also need to have an Enabling Father. The only other possibilities are a) that the father is also narcissistic, or b) the father is gone from the family. A man who stands up to his wife will not be tolerated for long, or will not find his life tolerable for long, and will either leave or be kicked out. Narcissists simply don’t have healthy and functioning relationships, and so there is either no relationship, or a dysfunctional and enabling one.

(Obviously this applies also to same-sex relationships. In which case you will have an Enabling Mother as well as a Narcissistic Mother.)

And Enabling Father is one who panders to the Narcissistic Mother, who facilitates her abuse of the children, who worships completely at her altar and expects the children to do so too. Or perhaps he does not worship as much as fears her; but the result is the same: he is her sidekick, making sure that she is kept happy no matter the cost to his children.

He can – as is the case with my own father – act as her hatchet man, being the one who defends her viciously, portraying his own version of Narcissistic Rage. He’s her front-line defence.

I remember my brother and me going to my father to protest at some specific of our mother’s treatment of us. I so clearly remember every word of his reply:

He said, “Don’t make me unhappy with the wife I’ve chosen”.

And by saying that, he dismissed our concerns totally. I cannot remember what the issue was, but it must have been serious enough for us to approach him, and we must have had right on our side or he would have argued the case on its own merits.

But he wasn’t going to help us. His need to feel that he’d chosen a good wife was more important than protecting his children.

It also shows that he needed to believe his wife was perfect, or near it, to feel he had chosen a good wife. And so they were both caught in this dance of believing her perfect and doing all necessary to preserve that illusion.

He was forever talking her up to us, telling us how wonderful she was, how great. This in itself was a form of gaslighting (albeit probably an unconscious form) because it didn’t tally with our experiences of her.

I remember as a child feeling very lonely and left out because their love for each other was a closed circle and there was no room for me in it. I certainly didn’t describe it in those words then, I didn’t have the words to describe it. But I distinctly remember the feeling, and thinking they loved each other so much there was no love left for me or my siblings.

Nowadays I think that their ‘love’ was more probably an unhealthy co-dependency.

My father fell into the role of enabling father because of his need to idolise her. Others, as mentioned above, will do so out of fear, being ground down by their narcissistic wife, and being unable to take their rages any more.

Whatever the reason they have given up, an Enabling Father will rationalise away his wife’s behaviour. He’ll tell the children things like, “She loves you in her own way.” Or, “Don’t mind her, it’s just her way.” Or, “Don’t annoy your mother, you know what she’s like.” Or the classic: “Be the bigger person”.

All of these translate as: “I don’t want to rock the boat here so you need to suck it up”.

This dynamic, of course, means that Daughters of Narcissistic Mothers, and sons of course, are living in a no-win situation. They have no champion, nobody to protect them.

There is more information on Enabling Fathers and the damage they do in my book You’re Not Crazy – It’s Your Mother, which is also available as part of the Mega DONM Resources Bundle.

I offer you my three books for instant download*.

* In 3 formats: PDF for PC, mobi for kindle, and epub for other readers. 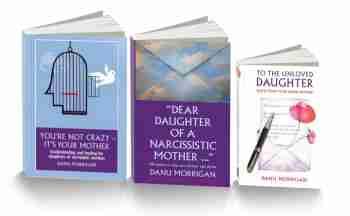